Stone is the most widely used construction material in the world. But why? What makes it so popular? What are the best examples of its use? Where is the future of stone construction heading?

Here’s our guide on everything you need to know.

What makes stone such a popular material?

There are a number of reasons why stone has become probably the most fundamental construction material on earth. After all, there are literally thousands of buildings on earth that rely almost solely on stone.

Almost all of the world’s most beautiful buildings were built using stone of one kind or another. And we’re not just talking about tourist sites: head to any small town, and you’ll usually find that the most pleasing buildings are made using stone. Stone nearly always ages well, which isn’t something you can say about buildings made using metal or glass.

It has a low environmental impact

Stone might well be the ‘greenest’ building material out there. The only bit of stone construction that requires energy at all is the initial quarrying phase, and even in that area, techniques have improved substantially. Stone also doesn’t require any additional materials to be added during construction and contains no pollutants at all.

Unlike other materials, stone is very easy to maintain once the work’s been completed. Good quality stone is remarkably easy to clean, and you don’t have to worry about painting or re-finishing it. Thirty-year-old stone buildings are easier to manage than metal buildings constructed last year.

Stone is the ideal material for anyone that wants to create an air of affluence without actually paying affluent prices. Stone naturally exudes elegance and sophistication. It offers a link to history. It is strength and power. However, stone is often far from the most expensive material you can use. 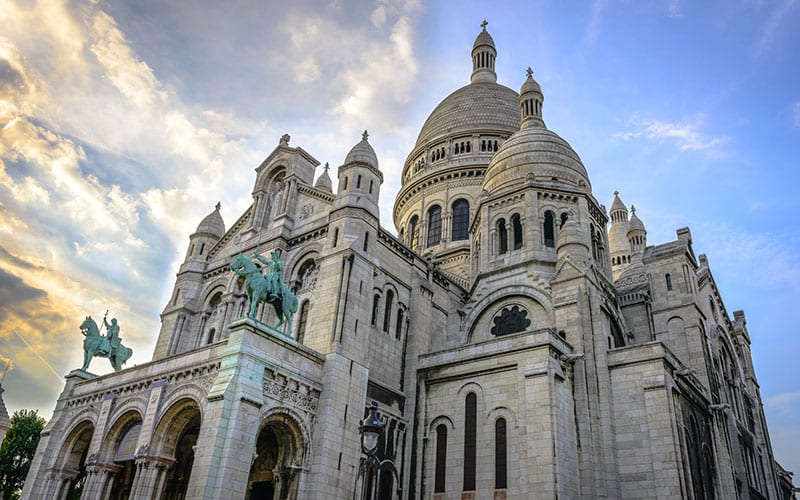 The evidence for this point can be seen in St Peter’s Basilica and in Hadrian’s Wall. It can be seen in the Taj Mahal and in Sacre Coeur. It can also be seen in Jerusalem’s Western Wall. Stone lasts. It endures. Stone gives you the opportunity to build something that could last for thousands of years. It’s quite unlike any other material.

The other factor worth mentioning in terms of durability is that stone doesn’t tend to show wear and tear in the same way that some materials do. Stone won’t scratch and scuff like wood, won’t show up marks and smudges like glass and won’t rust or flake like metal can. Stone holds its aesthetic.

One thing you’ll notice about the historic stone buildings we’ll cover later on are that the stone used varies. The buildings all look different: they all have their own unique characteristics and styles. And yet, they’re all constructed using stone. Stone is remarkably versatile. It can be used in anything from a sleek contemporary apartment to a traditional Mediterranean villa. Stone doesn’t provide its own aesthetic in the way that glass or metal might: it can be tailored to suit the unique vision you have for your project.

Which types of stone are commonly used in construction? 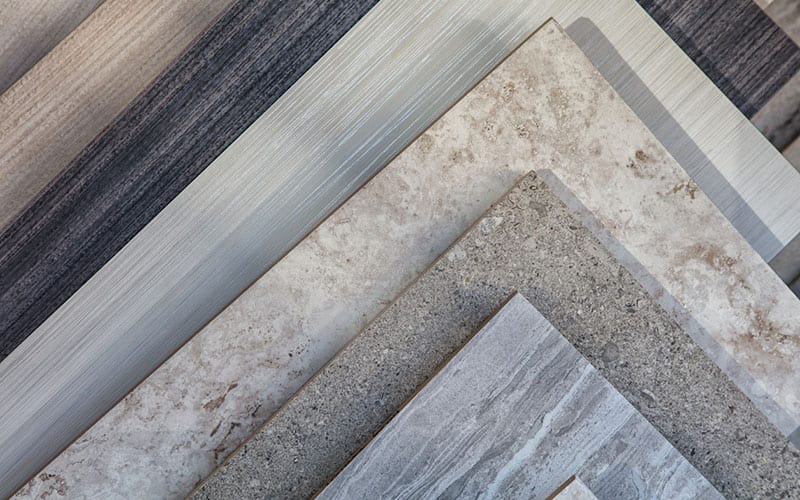 Because stone is found all over the world, it’s no surprise that in different parts of the world, different stone has been used in construction.

However, certain types of stone are more commonly seen than others. Here are some of the most frequently used type of stone.

Both of these stones are commonly found in roads, river walls and dams, as well as in pavements around the world. They’re medium to fine-grained, and are usually fairly dark in colour, with a medium to fine-grain structure. It’s quite rare to find basalt in building construction, and if so it’ll usually be found in the surrounding area.

Granite is a versatile stone that ranges from fine through to coarse and can be finished to a very high standard. It’s also extremely hard and durable, making it suitable for a range of different construction purposes. Like basalt and trap, granite can be found in river walls and dams. However, it’s often also used for monumental and institutional building construction because its aesthetic can lend an undoubted air of prestige to any project. 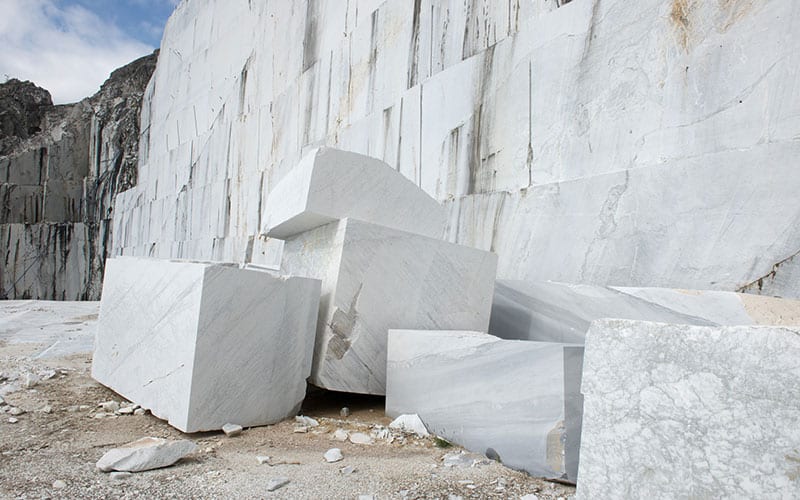 One of the most commonly used construction stones in antiquity, marble can still be seen in many of the world’s historic buildings. Like granite, it lends an air of luxury to any property it’s used in and can be polished to a very high standard. Its strength and stability make it suitable for a number of building works, including columns, flooring and steps. (It’s also suitable for facing and ornamental work.)

Sand stone doesn’t tend to be used for building construction by itself, due to the fact it can be weathered by rain. However, it can be used in heavy structures if combined with silica cement. This mix is again often used in dams, river walls and piers, as well as for high-quality masonry work.

As most people will be aware, this particular stone is commonly used for roofing tiles. However, it has a number of other uses in modern construction, including slabs and pavements.

Though laterite’s outer surface needs to be plastered, its strength makes it a popular building choice, due to its higher-than-average percentage of iron oxide. In terms of colour, it’s more versatile than other types of stone, ranging from light brown through to grey. It can also be easily quarried into blocks, which makes it invaluable in some areas of construction.

In modern construction, many people are turning to stone facades. That is, stone panels that are strengthened by an aluminium sub-structure. The ability to enjoy the stunning aesthetic of stone combined with the durability and flexibility of aluminium has proved unsurprisingly popular. (We’ll expand on this further down the page.)

Many of the world’s most historic structures were built using stone in some capacity. Here are some of the best examples. 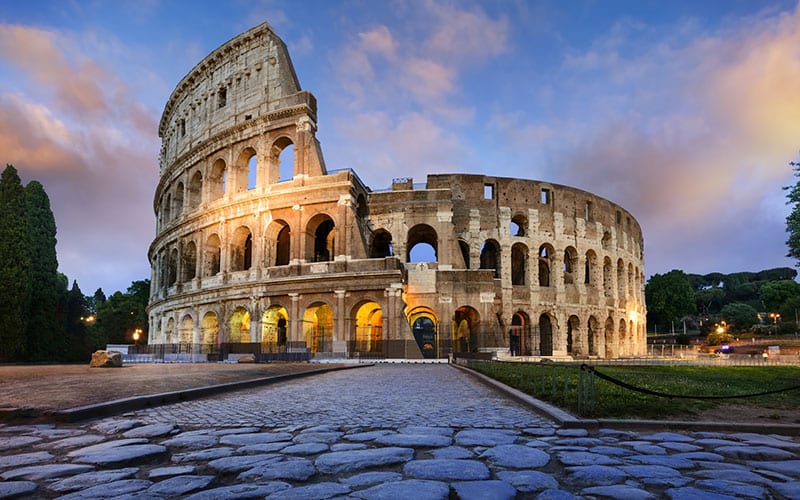 One of the world’s most famous tourist sights remains strong nearly two thousands years after construction, even if weather and years of mistreatment have damaged the exterior. The Colosseum was constructed using a number of materials, including Travertine (a form of limestone popular with the Romans) and Tuff (a porous stone constructed by cementing volcanic material). The Romans also used their own version of concrete, which combined clay and limestone.

Another of Rome’s most beautiful constructions, the Pantheon’s unique structure makes it almost unique, even within the context of the Roman Empire. A portico of red granite Corinthian columns holds up the vestibule, while the inner columns are constructed using Numidian yellow marble. Breccia, a rock that combines fragments of contrasting limestone and marble, is also found within the main atrium. The Pantheon also boasts the world’s largest unreinforced concrete dome.

Possibly the most beautiful Catholic Church in the world, Paris’ Notre Dame is another masterpiece in stone construction. The Gothic stylings are built from what’s known as ‘Courville Stone’ – a kind of hard limestone which is rich in calcite and not too porous, but which can vary in quality. The strongest stones were naturally used in the foundations of the church, with the finest being saved for the sculptures.

The Tower of London

A great deal of the stone used in London as a whole was shipped along the Thames from all over the country and the world: Lincolnshire Limestone, Welsh Slate, and Purbeck Marble, as well as white Carrera from Italy and Greek igneous rock can all be found in the capital. The Tower of London itself was founded in the aftermath of the Norman Invasion and constructed using a combination of Kentish Rag rubblestone alongside Caen and Quarry limestone. Reigate Stone sandstone, meanwhile, was used for the dressings of the famous ‘white tower’.

The future of stone construction

Though traditional stone has many virtues, more and more experts in construction are choosing to make use of Airtec Stone, a material that offers the best of both worlds: the aesthetic and strength of stone with the lightness and durability of an aluminium substructure.

One of the best examples of Airtec stone construction can be found right here in the UK.

Farringdon Station: Lithodecor in the heart of London 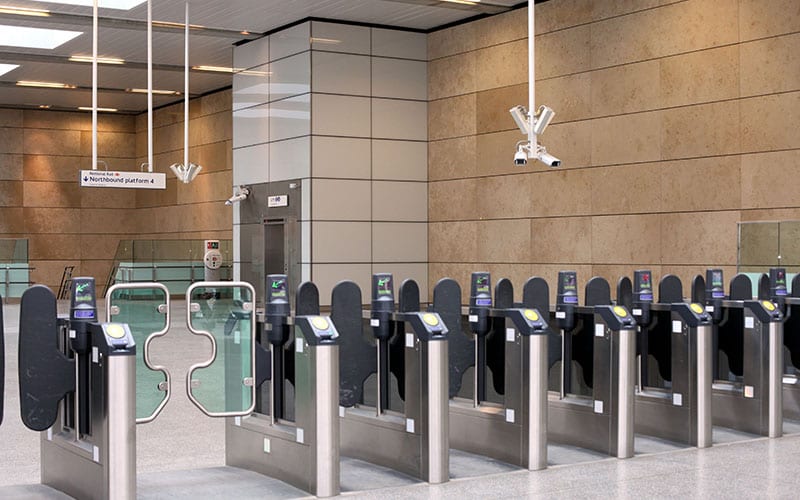 Farringdon Station is a stunning example of how stone facades can be used in a construction that’s modern whilst still maintaining a traditional air. As the main terminus for the first-ever underground railway, Farringdon is a part of London’s transport heritage and is set to once again become one of the busiest terminals in London when the Thameslink and Crossrail services are up and running.

2600m2 of Airtec natural stone panels were used during the course of the renovation project, with the main finish making use of a beige Jura Limestone. The panels can be found throughout the station, both as part of the station’s exterior façade and within the ticket hall right the way through to some of the platform areas.