Top 20 buildings with a view

The world is packed with beautiful landscapes, views and buildings. TV towers, Skyscrapers and observation towers are amongst the most emergent objects of unique architecture and human engineering. Below we discuss the top 20 buildings in the world which offer an amazing and iconic view.

This building is 828m tall, which makes it the tallest man-made structure in the world. From the observation deck, the view is simply breathtaking with the view of the Old Town Dubai at the bottom while the rest of the unique contrast of sights between old and modern Dubai looks out onto the horizon. The design of the building is derived from the Islamic architecture of the region and it’s won countless awards.

If you want to see the skyline, skyscrapers and lights of New York, then the world-famous Empire State Building will not leave you disappointed. This building offers unobstructed panoramic views of 80 miles into New York, Connecticut, New Jersey, Pennsylvania and Massachusetts on a clear day. 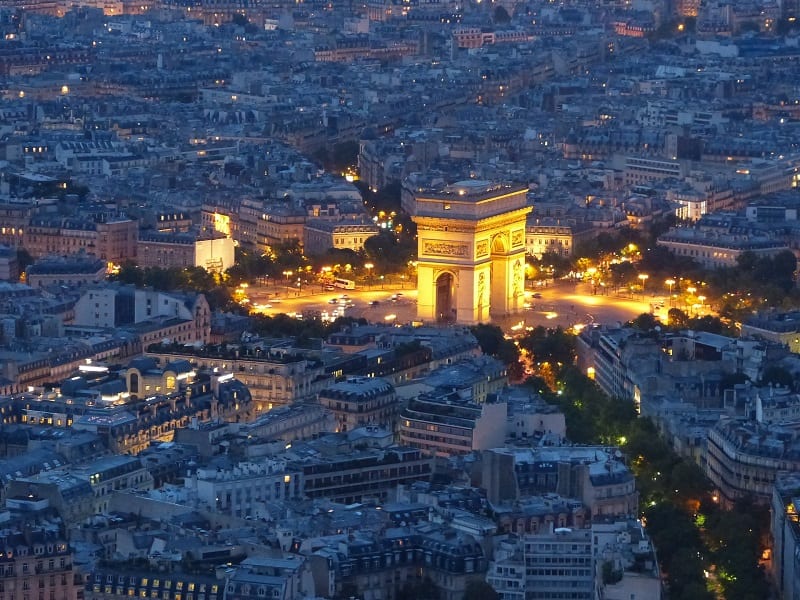 For a breath-taking view of Paris and the famous Eiffel tower, this is the perfect spot. It’s a trip of 284 steps to the top panoramic terrace from which your eyes sweep over the whole of Paris.

St Peter’s Basilica, located in Rome Italy, offers a fantastic and dizzying city panorama all around Rome. The original church was built in the 4th century by Emperor Constantine and was replaced after destruction by the new basilica in 1506-1626. It’s a well-known masterpiece of Renaissance architecture.Ob

If you want a skyline view of New York that includes the iconic Empire State Building, then this is the perfect spot. Head to the “Top Of the Rock” observation deck and from 70 floors up and you’ll be greeted with spectacular 360 views of New York.

For a stunning view of the red-rooftops of Florence, make your way to the Duomo. It’s worth the 463 steps upwards to be greeted with views of Florence in every direction. With beautiful views of Santa Croce glorious mountains in the distance.

From the top of the Washington Monument, you can see all of Washington, DC, including views of the iconic, White House, Capitol Building, Lincoln Memorial and the Tidal Basin. This beautiful building was built in the shape of an Egyptian obelisk, which was meant to showcase the timeless nature of ancient civilisations. 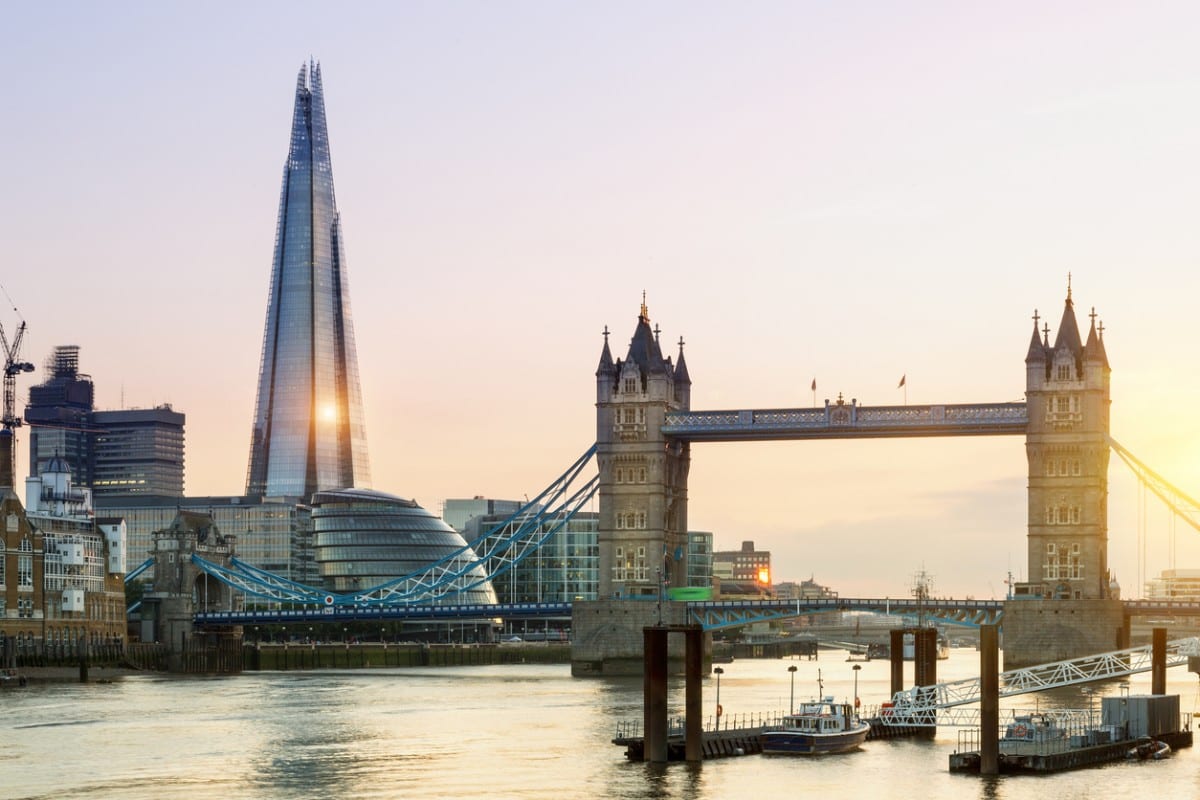 Offering 360 views of London’s iconic skyline, including, Big Ben, London Bridge, and the London Eye, the Shard London is the tallest building in London & the EU and an architectural beauty. In its construction, it used 11,000 glass panels and was completed in 2013. Interestingly, 95% of the materials used to construct the building are recycled.

The Skydeck in Chicago offers a clear 360 observation of Chicago’s amazing skyline and views extending to four states: Illinois, Indiana, Wisconsin and Michigan. The tower is a world-renowned building and a Chicago icon. This is one of the tallest buildings in the entire world and the tallest in all of the USA, so it’s impossible to miss when you appreciate the stunning skyline.

For a view of the iconic Las Vegas strip, take a trip to the Fountain Room at Mandalay Bay. The lounge offering beautiful views of the entire Strip is located on the 43rd floor of the hotel. Whilst you stand on the balcony, you’ll be greeted with an awe-inspiring view of the MGM Grand, all the way to the Eiffel Tower at the Paris of Las Vegas, and the rest. It’s one of the best places to take a photo with the entire Strip in the background.

Some of the best views of Bangkok can be found from the top of this beautiful building. Baiyoke is currently the tallest building in Thailand, at 309 metres. There is a public observatory on the 77th floor, but the rooftop bar is located at the 83rd one is probably the best view of Bangkok.

This building is stunning to see on its own, but the views from the roof terrace, bring the building to a whole new level. From the top, you will be greeted with views of the magic fountain, the iconic Sagrada Familia, and much more. This beautiful building is a unified style of Spanish Renaissance architecture with an air of academic classicism. You won’t be disappointed with the building, or the view it offers. 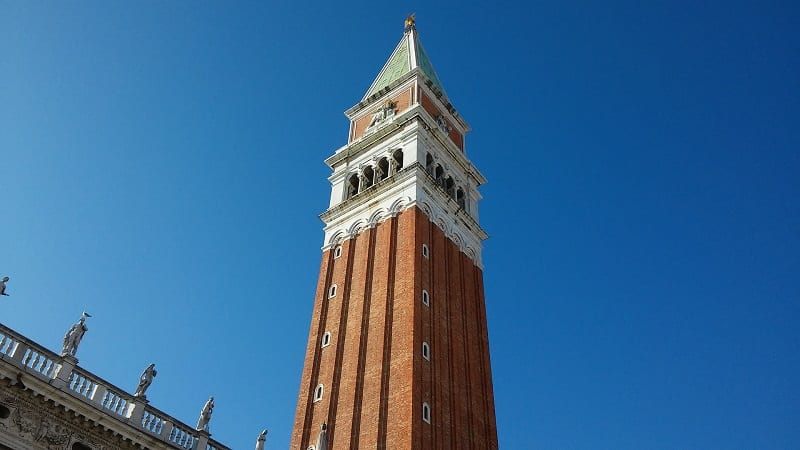 For sweeping views of romantic Venice, and surrounding luxurious St Marks Square, a trip up the bell tower is what you need. It’s the most recognisable symbol of the city. The tower is 98.6 metres tall and s situated alone in a corner of St Mark’s Square, near the front of the basilica. The original building was constructed in 1515, with the reconstruction completed in 1912.

The Battistero itself is a beautiful piece of architecture, but the view from the top floor also offers a view of one of the most iconic buildings in the world: the leaning tower of Pisa. Construction began in 1173 and thanks to the soft ground, it had begun to lean by the time its builders got to the third story, in 1178, which lead to the iconic lean that exists today.

The view from the Petronas Towers in the Malaysian capital is breath-taking. A visit the observation deck on the 86th floor is a must for sweeping views of the city. There is even an opportunity to walk between the structures of these iconic towers via the skybridge at 557 feet above the ground. 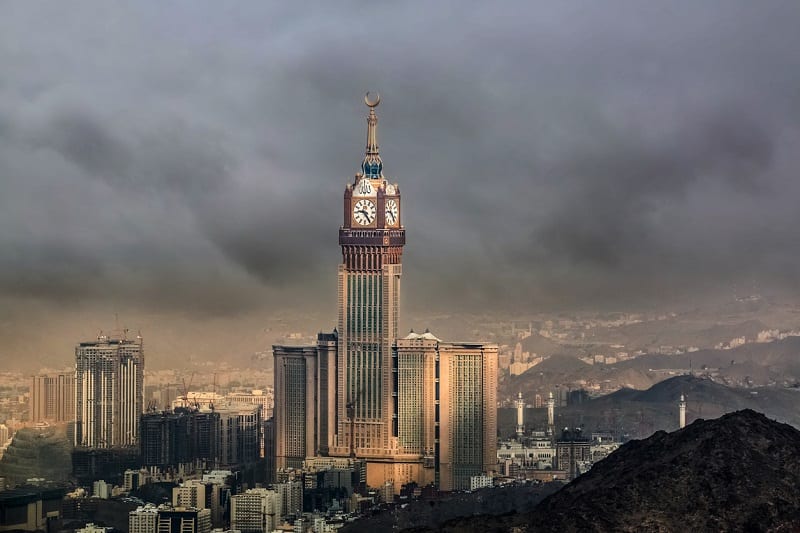 Makkah Royal Clock Tower brings a modern air to the hustle and bustle of the historic centre of Mecca. It’s the largest clock tower in the world and offers stunning views of the surrounding city. If you want to catch a view of the tower from below, the adjacent Grand Mosque will also you to view it in all its glory.

Located on the 100th floor of Shanghai’s World Financial Centre, there is an observatory platform that offers visitors sweeping views of China’s largest city from 1,555 feet up. This Neo-futurism architectural style has become an icon of China with its elegant and clear form dramatic at all scales.

Standing in the Xinyi District of Taipei, this iconic tower rises from its foundation in a series of eight-story modules that spread outward, evoking a shape of a Chinese pagoda. It offers beautiful views of the city. The building was designed as a symbol of Asian tradition fused with technology’s evolution.

Toronto, Canada Defining the Toronto skyline at 553.33m, this tower is one of Canada’s most iconic buildings, offer the best 360 view of the city below. CN Tower once held the record as the tallest tower and freestanding building for over three decades. Today, it is still the tallest in all of the Western Hemisphere. 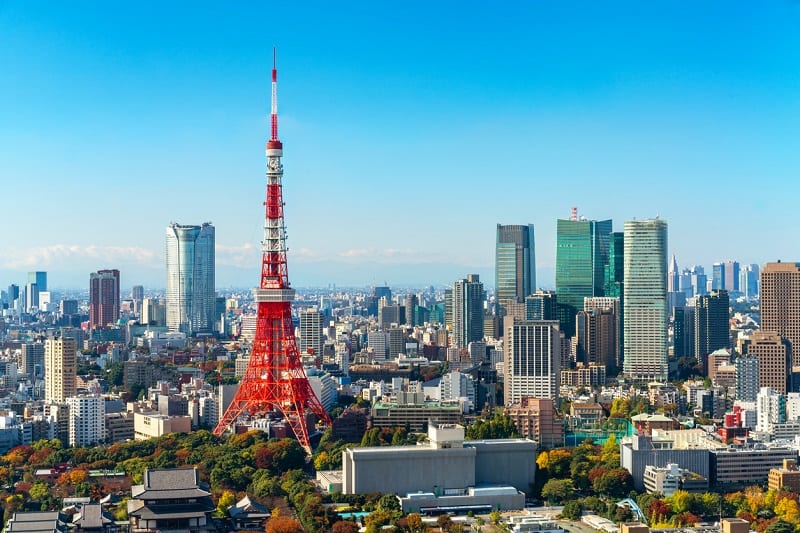 This unique tower offers sweeping views of the iconic, bright and busy skyline of Tokyo. At nightfall, the lights sparkle like stars. The structure is an Eiffel Tower-inspired lattice tower that is painted international orange and white. We hope these iconic views and buildings have inspired you to make some unique architectural decision of your own. Get in touch with alsecco today to see how we can help you create iconic façades.